Jessica Boone, born May 14, 1984 in La Porte, Texas, is the English voice actor of Chiyo-chan in the Azumanga Daioh anime. She is experienced in Shakespeare and musical theatre and has been a leading player with Prague Shakespeare Festival and Houston Shakespeare Festival. She is also known for her anime voice-over work, working for ADV Films and Seraphim Digital, as well as once for Funimation Entertainment when she appeared in Mushishi. She lives in the United States, but spends a lot of time in Prague, Czech Republic as well. She has been active since 1992. She has appeared in the anime Air Gear, D.N.Angel, Highschool of the Dead, Kaleido Star and Princess Tutu. She is 169 cm tall. 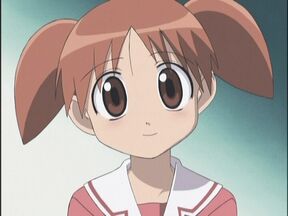 As Chiyo Chan in "Azumanga Daioh" (both the TV series and movie).
Community content is available under CC-BY-SA unless otherwise noted.
Advertisement