Mandy Clark, born June 9, 1982 in Houston, Texas, is the English voice actor of Tomo in the Azumanga Daioh anime (and various additional voices), a role for which she is most well-known. She auditioned for ADV Films in the year 2000 without prior drama training, and landed her first episode role in Excel Saga. In 2004, she began attending college and thus took a break from her voice acting job. She returned to Houston in 2006 and has now graduated. She works as a freelance digital artist and was married in 2009 to Cory Martin. She has also appeared in shows such as Neon Genesis Evangelion. She is interested in web design, writing and drawing in comic book and manga style. 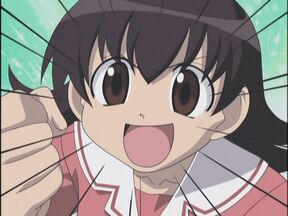 As Tomo in "Azumanga Daioh" (both the TV series and movie).
Community content is available under CC-BY-SA unless otherwise noted.
Advertisement