The Knuckleheads (ボンクラーズ Bonkurāzu) is a group consisting of Tomo Takino, Ayumu "Osaka" Kasuga and Kagura. Out of the six main characters from the series, the three of them are the dumbest, or those who get the worst results on exams. The "group" is first mentioned when Kagura is introduced to the class, and finds that nearly everyone is smarter than her, with an exception for Tomo and Osaka, in whom she finds her "equals".[1]

The trio being called the "Knuckleheads" (also "Bonklers", "Boneheads" or "Numbnuts" depending on translation) started when Kagura called Tomo and Osaka "Bonkurāzu", however, Osaka did not initially believe this included her because she thought Kagura had only been speaking to Tomo and saying "Bonkura" which is singular.[2]

The three of them tend to stick together so as to not be alone in being underachieving in a prestigious high school. Particularly Yomi finds the three of them ridiculous. 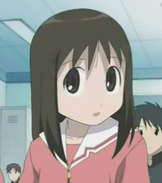 Out of the underachieving, Ayumu Kasuga is still the highest achieving. In the anime, she once suggested this should make her the leader, but the others disagreed.[3] 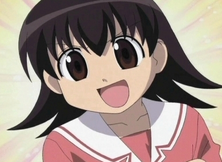 Tomo Takino is the second highest achieving out of the underachieving. Her constant energy knows no limit, and she is also self-confident and insensitive. 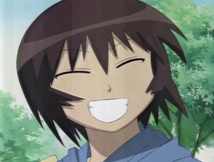 Kagura's grades are only slightly worse than those of Tomo's, possibly because of Kagura's devotion to the swim team. She was named the leader of the Knuckleheads because of this.[3]

The Knuckleheads as they appear in the opening of the Azumanga Daioh anime.

The Knuckleheads as they appear in Azumanga Daioh: The Very Short Movie.

The Knuckleheads as they appear in Azumanga Daioh: Supplementary Lessons.

The Knuckleheads as they appear in Azumanga Daioh Puzzle Bobble.

Community content is available under CC-BY-SA unless otherwise noted.
Advertisement